Ants really like sugar. This fact is obvious to anyone who has encountered a discarded lollipop on a summer sidewalk. Of course, this sweet tooth makes sense, as a diet with a high energy content is necessary for insects that spend the majority of their life on the move. However, ants don’t always wait around for upset toddlers to throw candy on the ground; no, many ants feel the need to take matters of sweetness into their own  tarsi.

A fairly common behavior documented in many ant species is the farming of honeydew, a sugary substance excreted by aphids, scale insects, and other homopteran insects. Honeydew is produced as a waste product of sap consumption, essentially containing excess sugar not needed by the insects’ metabolism. This unusual relationship is a good example of mutualistic symbiosis: the ants benefit by possessing a captive renewable food source, while the aphids benefit by protection, with ants purposefully defending their herds from predators such as ladybugs or parasitic wasps. However, the relationship is slightly skewed in favor of the ants. Interesting research published in Oliver (2009) found that chemicals released by the feet of ants can limit aphid activity, allowing ants to herd their aphids into specific boundaries. It is also not uncommon for ants to eat some of their aphids if conditions in the colony have become particularly desperate.

My primary focus for this post is not to discuss formicid honeydew farming, although that tangent was admittedly long, but instead to describe the remarkable predatory habits of an obscure southeast Asian insect that takes advantage of ants’ unquenchable thirst for honeydew. The Reduviidae is a large and highly diverse family of true bugs commonly called “assassin bugs” due to their stealthy hunting behavior towards other arthropods, often using camouflage to remain hidden until just the right moment. The subfamily Holoptilinae is relatively small and morphologically conservative, containing only about 80 species that generally specialize in ant predation and may be referred to rather awesomely as “ant wolves.” The Indonesian species Ptilocerus ochraceus Montandon, 1907 exhibits a particularly interesting hunting strategy that was documented in detail by Jacobson (1911). The behavior is now known to be pretty typical of holoptilin holoptilines, but was altogether unknown prior to Jacobson’s observations in Semarang, Java in the summer of 1909.

P. ochraceus is only known to attack one species of ant, the black ant, Dolichoderus thoracicus (Smith, 1860), a species that has been used as a biological agent to control pests on cocoa trees, Theobroma cacao L. The assassin bug positions itself directly in the path of the worker ants and, when approached, raises the front of its body into the air to expose a strange tuft of yellow hairs on its underside. This tuft, known as a “trichome,” secretes a sweet substance that is highly attractive to the ants, who cannot resist but to stop and stroke the trichome with their mandibles, the same behavior used to “milk” honeydew from their aphid herds. The ant may drink the substance from the assassin bug for many minutes while the bug remains motionless: or, as Jacobson puts it in my personal favorite quote from the original description,

“It is surprising to see how the bug can restrain its murderous intention as if it was knowing that the right moment had not yet arrived.” (Jacobson, 1911)

This is because the assassin does not need to act, the sweet substance itself is doing all the work. Shortly after finishing its meal, the ant only has time to move a few inches away from the bug before it begins to be paralyzed, losing all motility and curling its legs under itself. At this point, the assassin bug springs into action, seizes its prey and pierces it with its fearsome beak to finish the job and liquefy the ant’s internal organs. Jacobson made a point of observing this process many times to confirm that the bug did not harm the ant during the “milking,” but that the source of paralysis really was the substance itself. He also noted that many more ants killed themselves on the enticing treat than could ever be eaten by a single bug, a testament to the extremely high population densities of this ant on the island of Java. This incredible behavior, practiced by both adults and nymphs, is an amazing example of coevolution and offensive mimicry designed to take advantage of ants’ insatiable sweet tooth.

Oliver, T. H. (2009). The Ecology and Evolution of Ant-Aphid Interactions. 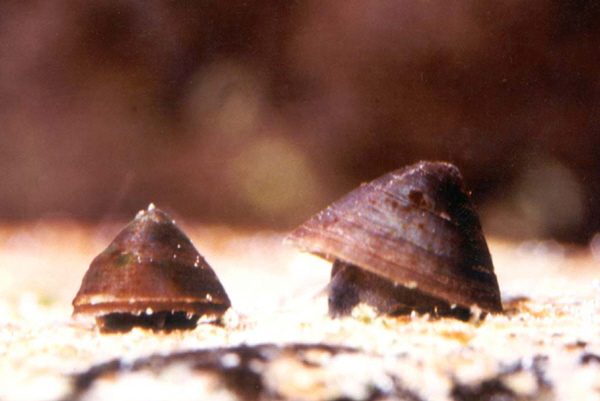 Although I don’t have a favorite animal, if forced to pick a group I would most likely opt for the fascinating and insanely diverse mollusks. Comprising over 85,000 extant species, this ancient lineage has representatives in nearly all imaginable ecosystems. 80% of those 85,000 species belong to the class Gastropoda, meaning “stomach foot” and including all the animals often referred to as snails and slugs. The term “limpet” is used for those gastropods that possess a flat external shell into which they are unable to withdraw. Taxonomically speaking, true limpets belong to the Patellogastropoda, a clade comprising five marine families, but the term is applied to many superficially similar yet unrelated snails in multiple families, both marine and freshwater.

Freshwater limpets are usually quite small, rendering them overlooked and obscure. Among this already obscure category of mollusks, one of the most poorly known lineages is the Lancinae, a subfamily of the Lymnaeidae. Lymnaeids are a worldwide group of freshwater snails, many of which tend to favor stagnant or slow-moving water. The majority of lymnaeids have scalariform shells with a prominent, sometimes highly inflated, body whorl. Differing markedly from most lymnaeids in shell morphology, lancines were often grouped with the ancylins, a diverse lineage of freshwater limpets with a worldwide distribution. It was not until 1925 that two studies, Pilsbry (1925) and Baker (1925), decided to look past the shape of the snails’ shells and examine their internal anatomy. Later studies would validate these findings and confirm that the lancines were indeed firmly nested in the lymnaeidae.

The Lancinae is represented by only four extant species, all found in northwestern North America. They seem to prefer cool, well oxygenated water associated with fast flowing springs. Relative to other limpets, their lungs are very poorly developed, negating the possibility of survival out of water for extended periods of time. As far as freshwater limpets go, lanxes are rather large with some species reaching approximately 20 mm (0.7 in) in length. Considering that just four species are found in the entirety of the Pacific Northwest, these snails generally have respectably sized distributions, with one notable exception. The Banbury Springs lanx, Idaholanx fresti Clark, Campbell & Lydeard, 2017, is currently recorded from only four isolated springs in Gooding County, Idaho, the Thousand, Banbury, Briggs, and Box Canyon Springs, which all empty into a roughly 5 mile (8 km) section of Snake River. Due to this extremely limited range, I. fresti has been federally recognized as endangered by the United States since 1973 when it was included in the U.S. Endangered Species Act, 44 years before it was recognized as a distinct species.

Although the lancines are the only modern patelliform lymnaeids, the fossil record shows that this body plan evolved multiple times among the Lymnaeidae during the Miocene epoch, which lasted from 23 to 5 mya. This lengthy time period saw a gradual draining of the European Paratethys Sea, creating a massive system of lakes. One of these lakes, the Pannonian lake, or Lake Pannon, harbored the evolution of a unique deep-water, limpet-like lymnaeid lineage known as the Valencienniinae. A series of fossils document the transition of shallow water snails with highly inflated shells to patelliform limpets that favored the deepest levels of the lake. The genus Delminiella was another Miocene deep-water patelliform lymnaeid from the Paratethys, but evolved separately from the valencienniines in a completely different lake, the Dinarid Lake System.

Baker HB (1925) Anatomy of Lanx, a limpet-like lymnaeid mollusk. Proceedings of the California Academy of Sciences 14: 143–169.